Due to unforeseen technical difficulties, Envoy 4 is being reposted as a “new” post when, in fact, it was originally posted on August 10th, 2009.

In addition, all of the comments left for this post from August 10th to August 21st had to be deleted. They have been copied and saved, however, and can be viewed as a PDF file by clicking HERE. 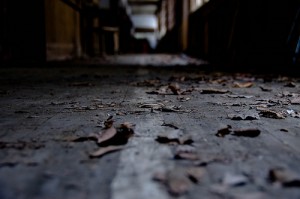 To quote Hiroaki Sato, Watanabe was “an employee of a publishing house” [and] “in 1938 published a series of 116 haiku highly critical of Japan’s invasion of China. In 1940 he was one of the fifteen haiku poets arrested and jailed . . . . After release, he was drafted into the navy. Forced into silence during the war, he largely stayed out of haiku after the war, and his haiku were not collected and published in book form until 1975” (Modern Haiku 36.2).

The time during which this poem was written is considered to be “a dark age for haiku” (Itô Yûki). Watanabe was a member of the gendai haiku (“modern haiku”) movement that began during the 1920s, named the New Rising Haiku, and was a prominent contributor to the haiku magazine Kyôdai Haiku (Kyoto University Haiku). Because this movement and the journals and magazines that were devoted to this work were non-traditional, and, therefore, unpatriotic and dangerous, Watanbe and numerous others were arrested in 1940 by the Secret Police and imprisoned and tortured. A few even died because of their treatment. 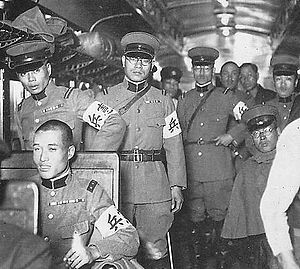 In Ito Yuki’s tremendous monograph on this time period in Japanese haiku composition
and history, “New Rising Haiku,” he writes:
“In this atmosphere of war fanaticism and a controlled society existing under a fascist‑
Imperial government, the New Rising Haiku poets wrote haiku with acuity, cruelty, strange-
ness and absurdity when addressing the topic of the war. They even expressed compassion with enemies. At the time, ‘non‑patriotic’ (hi-kokumin) meant non-citizen, and writing haiku without kigo meant rebellion against the Japan-
ese Imperial tradition. . . . [T]heir aim was ‘to overthrow the conservative haiku as season-hobby literature, and to create gendai haiku as season-feeling literature in the spirit of Bashō,
and as true poetry’.”

In part, I chose this poem wanting to somehow connect it to the “squid/bankers” poem by Kaneko Tōta, the leader of the postwar haiku movement, that was featured in Envoy 1. Searching sites containing Tōta’s translated work as well as his thoughts on haiku, I came across his top 10 favorite Japanese haiku. Watanabe’s poem was among them.

Ultimately though, I chose Watanabe’s poem because it has a timelessness and universality to it and also a timeliness in regards to what is going on right now in the world, not unlike Tōta’s “squid/bankers” poem. The Watanabe ku is about war (or, War) and, I believe, enables and requires us to ponder and reflect on the state of our world, cultures and societies at this moment, in this era, from a Western point of view: two major wars, wire-tapping, torture, secret prisons, terrorism, abuses of power, censorship, drone bombings, secret military programs, the US military and local police spying on peace groups and leftist organizations/activists, the military-industrial complex; and how the wars being conducted affect other, if not all, aspects of our societies and economy—energy, food, health care, media, infrastructure—if not the entire world.

Though the wars are not “here,” perhaps we could put ourselves in the shoes of an Iraqi or Afghani, a Tibetan, Palestinian, Iranian or Honduran, or other places on earth where war and governement/military intimidation are taking place. Where has and does War show up for normal, everyday citizens? Though this Envoy’s poem was written by a Japanese citizen of the 1930s, whose opinions and art, along with many others, were monitored, censored, and gagged by their government and their Secret/Thought police, it is not entirely entrenched in that era or frozen in a time or place, though it’s history enriches it and gives it remarkable depth.

How do we read this poem as 21st century global citizens? Or as an American or Westerner in this day and age? I also wonder: what would the effect be if “war” were replaced by the word “media” or, as mentioned in the Asahi Shimbun article below, “unemployment”? Why don’t we see more haiku/senryu being written on these topics that affect our lives, the lives of others, and our environment? If we want to stop the atrocities of war and their destructive repercussions, shouldn’t we be writing about it then, instead of, say, birds and baseball?

Once again, the difficult question might arise for some, as stated by Peter Yovu in his “3rd Sailing” post: “Haiku? Senryu? Does it matter?” It seems most Japanese critics and poets, however, consider it to be a haiku, and as a preeminent example of the kind of non-traditional haiku that were being composed starting in the 1920s. Also, as Ban’ya Natsuishi has stated in his commentary below, “war” is a non-seasonal keyword and a shift towards universality in world haiku composition.

Tremendous thanks once again to everyone who offered new versions of this poem in English as well as commentaries.

the war was standing at the end of the corridor

war
has stood
in the depth of the corridor

War
stood at the corridor end

This poem is centered around “war,” a non-seasonal keyword shared unhappily by all of humanity. In personifying “war,” this haiku has become an eerily frightening incantation.

Fear, along with joy and sadness, is a universal emotion.

Furthermore, between “war” and “stood at the corridor end,” there is a great mental leap, or “cut.” What supports this “cut” is not the accumulation of technical skill that stretches to the classics, but rather a flight of imagination that took place in one poet’s mind.

Japanese aesthetics is an important foundation of haiku, but both the universality of Hakusen Watanabe’s poem, and the individual imagination that brought it to life, are even more important.

Rather than talking about the “internationalization” of haiku, we should consider haiku as a stimulating form of expression which tests the limits to which individual personalities and the regional cultures in which they are grounded can transcend national boundaries to achieve universality (“Tokyo Haiku Manifesto 1999: A First Step toward World Haiku”).

[Also,] (i)n Japan, in the 1930s, New Style Haiku poets tried to create surrealistic haiku based on their experience and imagination during World War II.

[In addition, this] contemporary haiku . . . include(s) kire, revealing the leap in the poet’s unique viewpoint. . . . [T]he reader is expected to read carefully and thoroughly to discover the kire. Because of kire, appreciating haiku is highly intellectual work. Looking at it in another way, an excellent poet is someone who can skillfully fold the kire inside the haiku (“Technique used in Modern Japanese Haiku:  Vocabulary and Structure”).

War stood
at the end of the corridor

This poem is included in Ban’ya Natsuishi’s introductory book for children, Haiku Kyoushitsu 俳句教室 (Shueisha, 2002). The accompanying note says that it means the atmosphere of war reached even the end of the corridor in ordinary homes and towns. In other words, that it pervaded everything. I suppose this sense of foreboding is captured in a concrete way in the poem. The cartoon illustration in the little manga volume shows a rather forbidding helmeted soldier with a gun on his shoulder walking towards us along the corridor of an old wooden building. Ban’ya writes that, “It conveys the fearfulness of wartime.”

I might also draw readers’ attention to the three poems by Watanabe Hakusen in the new Gendai Haiku Kyokai anthology published in 2008, The Haiku Universe for the 21st Century. I noticed when I was going through this anthology that all three of his feature the colour red, and so I wondered about the significance of that. It may be just by chance, or it could be something central to his imagination, I don’t know.

war lurks,
just the far side
of this hall

The literal translation of sensô ga tatte ita is “war stands” but this sounds awkward, so I chose “war lurks” instead as a way to clarify the foreboding mood of this haiku. I also chose the word “hall” instead of “corridor” because it makes it clearer that this is a part of a living space and eliminates the possibility of it being a strip of land or faraway passage. This decision reflects my gut reaction that Watanabe is emphasizing the horror of war by bringing it closer to home.

The war is standing
At the end of the hallway
Inside of our home.

My reading: The haiku expresses the author’s hatred of the war, which is invading his peaceful home life. 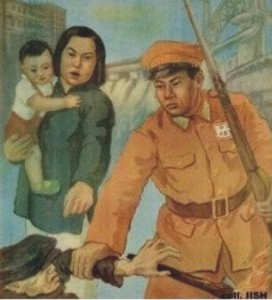 war stands at the far end of the corridor

‘Okusan’, or person in the inner sanctum of the house is a polite but very commonly used Japanese word for ‘the woman of the house’. The choice the word ‘oku’ (deep inside; back part of; inner sanctum) for this haiku provides a sense not only of depth and secrecy but also of invasion. It brings a very sinister flavour to the piece.

War is personified. It stands at the end of the corridor. It waits in the future. It reaches everywhere, even (and this is a distant association – but poignant and true)where women and children have taken refuge. It stands planning its strategy and tactics hidden far away from the young combatants who must carry them out and bear the costs of that.

The particle ‘ga’ makes this haiku seem conversational and rhetorically simple. There is nothing but a (metaphorical) but spare statement.

The sound is constrained by long and short ‘o’, sounds, which kinesthetically reproduce the corridor itself. As the lowest (on the musical scale) vowel sound in Japanese, ‘o’ brings a musically dark quality to the piece that also enhances the meaning.

The haiku is simple to read but difficult to translate poetically, since it starts with the subject, War, then says: “deep down a corridor”, and ends with the verb “was standing.”

In English, this pattern sounds unnatural and not so effective: “war/ down a hallway/ was standing,” so I think I’ll shift things around to:

way down a hallway
stood
War

This violates my normal rule of following the general image pattern, but I think in English it just sounds and works better poetically to end, not begin, with War. It feels more horrific, revealing the subject at the end, lurking like a monster. I capitalize “War” to indicate the personification.

The war stood
at the dead end
of the corridor

War was standing
At the far end of the corridor

This spine-tingling image makes me shudder: War creeping up silently behind us until suddenly, we see it looming large in the gloom.

If we put “unemployment” in place of “war” in this image, perhaps this is how Hakusen would have penned a haiku on deregulation of the temp labor market. We should be filled with regret that we came to realize too late how this situation is only convenient for employers, and cruel to workers.

War was standing at the corridor’s end

This is as simple and straightforward as a haiku can get, and I have nothing particular to add. 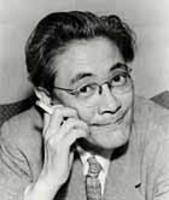