You are here: Home / Book-of-the-Week Archive / Book of the Week: This Moment 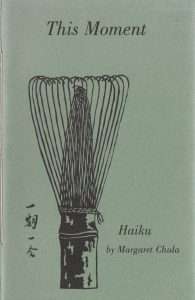 Margaret Chula has contributed to haiku in English not only through her own fine poems but through founding and operating Katsura Press, which published this extended meditation on the tea ceremony (1995) in the house’s typically elegant style. Paperback copies of the book are still available at www.margaretchula.com.