You are here: Home / Book-of-the-Week Archive / Book of the Week: Faraway Hills 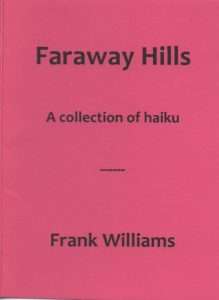 Frank Williams has been a mainstay of British Haiku for the last decade, and his keen, often piquant observations and sure technique make his work easy to like. Faraway Hills (self-published, 2010) falls easily into this category, a very brief set of vignettes, each crisp and hinting of multiple stories beyond, as our examples will testify.