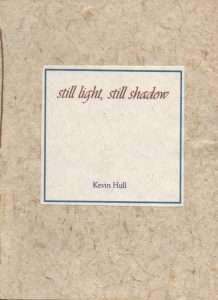 Kevin Hull was an active presence in the haiku world of the later 1990s, published in all the major journals and active in the publishing side of things. still light, still shadow (White Heron Press, 1997) is probably his best-known work, a quiet set of poems that have held their resonance nicely over a couple decades, as is evident from these examples.