"This essay delineates significant differences between English language, especially American, haiku and haiku made by poets in other languages and cultures. We also offer some suggestions as to why foreign language haiku often seem to us so ... well ... foreign." --from the author's Introduction.

This essay describes how haiku in Hispanic American countries, in France, in Russia and in Brazil followed significantly different paths of development than did haiku in North America.

This version is a slight revision of the two-part essay published in Modern Haiku.

This essay appears here with the permission of the author. 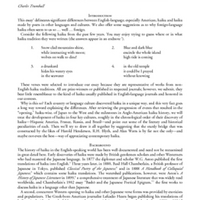