Sampled from the original - 現代俳句歳時記 無季 [Modern Haiku Saijiki: Muki] published by 学習研究社
(Gakushūkenkyūsha) 2004/05
ISBN-10: 4054023355
ISBN-13: 978-4054023352
The "muki" volume or "no-season kigo" volume from which this selection was made is one of five in this modern, or gendai, haiku saijiki. This is the only English translation that has so far been made so far. This publication, according to Gilbert, with its innovative choice of non-seasonal categories, is an epoch-making event in the history of saijiki.

The introductory portion of this book and the Table of Contents were originally published by Simply Haiku, 4:3

All rights reserved. Richard Gilbert's selection, translated into English, is published under a creative commons license and is republished here with the kind permission of the compiler. 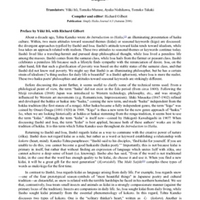