From 5-7-5 to 8-8-8: An Investigation of Japanese Haiku
Metrics and Implications for English Haiku

From 5-7-5 to 8-8-8: An Investigation of Japanese Haiku
Metrics and Implications for English Haiku

ABSTRACT: The question of how English-language haiku form may best emulate Japanese 5-7-5 haiku (or whether it even should at all) has been hotly debated for decades. A recent trend in Japanese poetic analysis, however, Interprets haiku in terms of 3 lines of 8 beats each onto which the 5-7-5 -on are mapped. This paper presents an overview of this trend, supported both by theory from metrical phonology and by observed experimental data of subjects reading haiku in Japanese. It was found that the 8-8-8 metrical pattern is indeed verifiably present in haiku reading, and that this pattern serves to map both haiku with 5-7-5 -on and other -on counts. Based on these findings, implications for English haiku form, especially with respect to emulation, lineation, and metricality are discussed within the context of the North American haiku movement. It is proposed that haiku in both Japanese verse and English free verse may naturally fit into a similar metrical form. It is hoped that a metrical analysis, operating across both Languages, may help clear up some misconceptions regarding the Japanese haiku in the West, while providing an impetus to bridge the gap between the Japanese and world haiku movements.

All rights reserved. This essay is republished here with the kind permission of the authors. 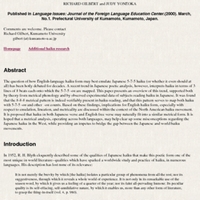 Gilbert, Richard and Yoneoeka, Judy, “From 5-7-5 to 8-8-8: An Investigation of Japanese Haiku
Metrics and Implications for English Haiku,” The Haiku Foundation Digital Library, accessed September 19, 2020, https://www.thehaikufoundation.org/omeka/items/show/1799.