Martin Lucas's PhD thesis on British haiku.
Summary
The subject of this thesis is the haiku poem, which is now established as a viable form in English. The possibilities of the form - and its kindred forms of tanka, renga and haibun - are exemplified by my own creative writing, presented in Chapter Seven. This presentation is supported by nine further chapters dealing successively with haiku history, theory, practice and context. The chapters on haiku history offer an outline of the development of the form in Japan, together with discussion of its initial adaptation to the English-language context in North America. Chapter Four, on haiku theory, brings together a series of diverse essays which combine into a detailed analysis of the key requirements of haiku, both in terms of form and content. The chapters on haiku practice focus attention on the poets and publications that have pioneered the development of haiku in Britain during the decade of the 1990s. The three concluding chapters analyse haiku in the context of renga (linked verse), haibun (haiku prose), and in relation to other forms of artistic presentation, not least other forms of poetry. The entire thesis is intended to constitute a thorough grounding in the specific demands and values of haiku in English.

All rights reserved. This thesis is republished here with the kind permission of the author's brother and literary executor, David Lucas. 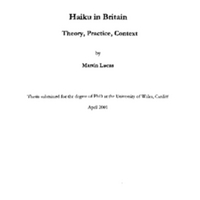