ABSTRACT
My dissertation “‘Bitter Sweet Home’: Celebration of Biculturalism in Japanese Language Japanese American Literature, 1936-1952” explores Japanese-language
Japanese American literature as a discourse of identity politics among Japanese Americans between 1936 and 1952. Shūkaku, the first Japanese American translocal and
multi-genre literary journal, published its inaugural issue in November of 1936, and 1952
marked the publication of Ibara aru shiramichi (Thorny path) by Asako Yamamoto, which was one of the earliest sustained literary accounts either in English or Japanese of
the wartime experiences of Japanese Americans. One of the major goals of this dissertation is to uncover the muffled voices of Japanese Americans whose primary
language was Japanese. I further scrutinize the ways in which Japanese Americans alued the tradition of English-Japanese bilingualism, and how bilingualism played a
central role in the formation of Japanese American identity. From the 1930s through the Pacific War when the relationship of Japan and the US was the most hostile, and even after the war when Japan-US relations changed dramatically, Japanese Americans felt
acute pressures to suppress Japanese language and culture which had become associated with political sympathizer with Japan, the enemy, and therefore disloyalty to the US Even under such intense pressure, however, bilingualism remained a critical tool for
Japanese Americans to maintain and reconfigure their identity. They carefully guarded the tradition of biculturalism grounded in bilingualism to preserve a distinct identity
against the intensified pressures of Americanization with the emphasis on English-only monolingualism.
The wartime political environment imposed a racially polarized discourse of American identity that singled out Japanese Americans as disloyal group and gave new
impetus to Americanization programs. I argue that Japanese language literature provided writers protected space within which they engaged politically charged discussions on such topics as racialized and gendered politics of loyalty and retaining biculturalism under the increasing pressure of Americanization. After the war, as the issue of disloyalty receded, Japanese language literature acquired a new role as a critical resource
for Japanese Americans to commemorate wartime experiences, and to rebuild cultural and psychological ties with Japan and Japanese culture. 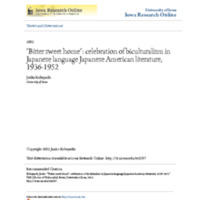